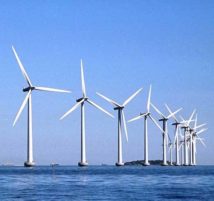 Wind speeds over open ocean areas are often higher than those in the windiest areas over land, which has motivated a quest to develop technologies that could harvest wind energy in deep water environments. However, it remains unclear whether these open ocean wind speeds are higher because of lack of surface drag or whether a greater downward transport of kinetic energy may be sustained in open ocean environments. Focusing on the North Atlantic region, we provide evidence that there is potential for greater downward transport of kinetic energy in the overlying atmosphere. As a result, wind power generation over some ocean areas can exceed power generation on land by a factor of three or more.

Wind turbines continuously remove kinetic energy from the lower troposphere, thereby reducing the wind speed near hub height. The rate of electricity generation in large wind farms containing multiple wind arrays is, therefore, constrained by the rate of kinetic energy replenishment from the atmosphere above. In recent years, a growing body of research argues that the rate of generated power is limited to around 1.5 W m−2 within large wind farms. However, in this study, we show that considerably higher power generation rates may be sustainable over some open ocean areas. In particular, the North Atlantic is identified as a region where the downward transport of kinetic energy may sustain extraction rates of 6 W m−2 and above over large areas in the annual mean. Furthermore, our results indicate that the surface heat flux from the oceans to the atmosphere may play an important role in creating regions where sustained high rates of downward transport of kinetic energy and thus, high rates of kinetic energy extraction may be geophysical possible. While no commercial-scale deep water wind farms yet exist, our results suggest that such technologies, if they became technically and economically feasible, could potentially provide civilization-scale power….http://www.pnas.org/