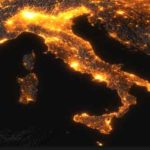 Light pollution is the alteration of night natural lighting levels caused by anthropogenic sources of light (1). Natural lighting levels are governed by natural celestial sources, mainly the Moon, natural atmospheric emission (airglow), the stars and the Milky Way, and zodiacal light. During moonless nights, the luminance of the clear sky background far from the Milky Way and zodiacal light is about 22 magnitude per square arcsecond (mag/arcsec2) in the Johnson-Cousins V-band (2), equivalent to 1.7 × 10−4 cd/m2. Artificial light scattered in the atmosphere raises night sky luminance, creating the most visible negative effect of light pollution—artificial skyglow. In addition to hindering ground-based optical astronomical observations, the artificial brightening of the night sky represents a profound alteration of a fundamental human experience—the opportunity for each person to view and ponder the night sky. Even small increases in sky brightness degrade this experience. Light pollution is no longer only a matter for professional astronomers (3, 4). Although researchers from disparate fields are now interested in light pollution, its magnitude is poorly known on a global scale because measurements are sporadically distributed across the globe. To overcome this, we present the world atlas of artificial sky luminance, which was obtained with our dedicated light pollution propagation software using the new calibrated, high–dynamic range, high-resolution data from the Visible Infrared Imaging Radiometer Suite (VIIRS) Day/Night Band (DNB), new precision charge-coupled device (CCD) brightness measurements, and a new database of Sky Quality Meter (SQM) measurements.

Light pollution is one of the most pervasive forms of environmental alteration (5). It affects even otherwise pristine sites because it is easily observed during the night hundreds of kilometres from its source in landscapes that seem untouched by humans during the day (6), damaging the nighttime landscapes even in protected areas, such as national parks (for example, the light domes of Las Vegas and Los Angeles as seen from Death Valley National Park). Notwithstanding its global presence, light pollution has received relatively little attention from environmental scientists in the past. This is changing, as attested by the rapidly increasing rate of published works on the subject.

The atlas we present here is intended to help researchers in all fields who may be interested in the levels of light pollution for their studies (for example, in astronomy, ecology, environmental protection, and economics).