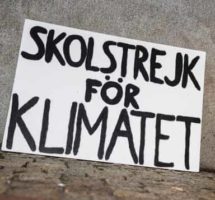 Why bother to learn anything in school if politicians won’t pay attention to the facts?
This simple realisation prompted Greta Thunberg, 15, to protest in the most effective way she knew. She is on strike, refusing to go to school until Sweden’s general election on 9 September to draw attention to the climate crisis.
Her protest has captured the imagination of a country that has been struck by heatwaves and wildfires in its hottest summer since records began 262 years ago.
Wildfires rage in Arctic Circle as Sweden calls for help
Read more
Every day for two weeks, Thunberg has been sitting quietly on the cobblestones outside parliament in central Stockholm, handing out leaflets that declare: “I am doing this because you adults are shitting on my future.”
Thunberg herself is a diminutive girl with pigtails and a fleeting smile – not the stereotypical leader of a climate revolution.
“I am doing this because nobody else is doing anything. It is my moral responsibility to do what I can,” she says. “I want the politicians to prioritise the climate question, focus on the climate and treat it like a crisis.”
Advertisement
When people tell her she should be at school, she points to the textbooks in her satchel.
“I have my books here,” she says in flawless English. “But also I am thinking: what am I missing? What am I going to learn in school? Facts don’t matter any more, politicians aren’t listening to the scientists, so why should I learn?”
Thunberg’s protest might come as a surprise to anyone seduced by Sweden’s reputation as a climate pioneer and champion of the environment. This year the country enacted “the most ambitious climate law in the world”, aiming to become carbon neutral by 2045 and comfortably beating the 2015 Paris climate targets along the way.
“This is too little too late, it needs to come much faster,” Thunberg says. “Sweden is not a green paradise, it has one of the biggest carbon footprints.”
Her parents want her to give up her protest and go back to school. “My teachers are divided,” Thunberg says. “As people they think what I am doing is good, but as teachers they say I should stop…https://www.theguardian.com