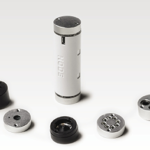 In 2007, when the Department of Homeland Security (DHS) issued a call for a sensor that could equip a smartphone with the ability to detect dangerous gases and chemicals, Ames Research Center scientist Jing Li had a ready response. Four years earlier, she led a team that wrote a paper on the use of carbon nanotube sensors for gas and organic vapor detection, which would later receive Ames’ 2012 H. Julian Allen award for outstanding science and engineering papers.
NODE+ and sensors
The NODE platform can be outfitted with an array of different sensor modules for detecting light, gases, temperature, motion, and more. It can store data or transmit it to a smart device using Bluetooth wireless technology.
She had been developing the use of single-walled carbon nanotubes that respond to various gases and compounds for use in NASA applications, such as evaluating planetary atmospheres, detecting chemicals around rocket launch pads, and monitoring the performance of life-support systems. Her proposal in response to DHS’s Cell-All initiative was awarded funding through an interagency agreement in 2008. What she still needed was a way for the device to “sniff” the air for samples and a system that would allow it to interface with a smartphone.
Li approached George Yu of Genel Systems Inc. “Genel had the technology to provide a very small sample collection system,” Li says, noting that the company was subcontracted shortly after funding was awarded. In the end, however, that sampling jet proved too noisy, and Li and her team settled instead on a tiny fan. Then a separate contract for the cell phone interface system fell through. “That contract didn’t work out, so I asked George to do it—I know he is good at electrical circuit design,” Li says.
The team settled on the iPhone, which was new at the time, and Li convinced the program manager at DHS that the sensor should be a module attached to the outside of the phone, rather than a system built into the phone’s guts. “This is a very new technology, and there will be a lot of iterations. Making it interchangeable will make it easier to update,” she explains.
This modular design not only will pave the way for future smartphone chemical sensors but also presaged the line of interchangeable, smartphone-savvy sensors Yu would commercialize a few years later, after founding Variable Inc. in Chattanooga, Tennessee.