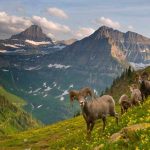 The Interior Department on Wednesday announced a settlement with Devon Energy for the cancellation of leases in Montana for oil and gas drilling on lands considered sacred by the Blackfeet Tribe.

“This is the right action to take on behalf of current and future generations,” Interior Secretary Sally Jewell said on the department’s Web site. She said it would protect the region’s “rich cultural and natural resources and recognizes the irreparable impacts that oil and gas development would have on them.”

The settlement comes as the Obama administration seeks to wrap up outstanding issues and as Native Americans in nearby North Dakota are protesting to block the construction of an oil pipeline just north of the Standing Rock Sioux reservation.

The exploration leases in Montana covered parts of the Badger-Two Medicine area of the Lewis and Clark National Forest in northwest Montana, an expanse that covers a 130,000 acres surrounded by Glacier National Park, the Bob Marshall Wilderness and the Blackfeet Indian reservation.

“There aren’t many places like this left in the lower 48,” said Michael Jamison, a senior program manager for the National Parks Conservation Association, noting that the area is home to grizzly bears, elk, wolves and an array of other wildlife. “It is a tremendously important ecosystem.”

The area also is home to the creation story of the Blackfeet, said Chase Huntley, senior director of energy and climate at The Wilderness Society. Huntley said many of the leases were sold for less than $1 an acre and he alleged there was “no effort to reach out to the tribe.”

Under the terms of the cancellation, Devon is entitled to a refund for all bids and other payments totaling $206,058. Half of that amount will come from a Treasury Department account that receives royalties from onshore oil and gas development and half will come from the state of Montana, which also receives royalty payments. Because the land was never developed and the area remains undisturbed, Devon does not need to pay for any reclamation.

Harry Barnes, chairman of the Blackfeet Nation Tribal Business Council, said in an interview that area has been long been a sacred spot for the tribe.
“A lot of our creation stories emanate from this area. It’s a significant area, it always has been for thousands of years,” Barnes said. “While we’re not opposed to oil and gas exploration, we are opposed to oil and gas exploration in that area.”

He called Wednesday’s settlement a “victory for not only the Blackfeet people, but for all of America. It’s such a beautiful area. It’s Mother Earth, and it needs to be enjoyed by everybody.”

In March, Jewell announced the cancellation of a lease held by Solonex. Solonex, a Louisiana company, sued for permission to drill on land tied to the leases, which date back to 1982. The department said the lease was improperly issued in violation of the National Environmental Policy Act and the National Historical Preservation Act.

The Interior Department under President Reagan issued 47 oil and gas drilling leases in Badger-Two Medicine. Later, nearly two thirds of the original leaseholders, including BP and Occidental Petroleum, took advantage of tax incentives established by Congress in exchange for relinquishing the leases in the area. By early this year, only 17 remained.
Devon Energy owned 15 of the remaining leases. Devon, based in Oklahoma City, has more than doubled its oil production since 2011. It is also a major natural gas producer.

“There are special places in this world where we just shouldn’t drill, and the Badger-Two Medicine is one of those places,” Sen. Jon Tester (D-Mont.), said in a statement adding that Wednesday’s settlement ensures the area “will remain pristine for both the Tribe and the folks who love to hunt, hike, and fish near Glacier Park and the Bob Marshall Wilderness.”