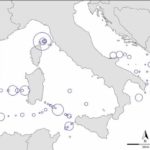 Global production of plastic materials increased twenty-fold in the last fifty years, exceeding 300 million tonnes in 20151. Demand is growing exponentially and production is expected to quadruple by 2050, taking up 20% of total oil consumption and 15% of the global carbon budget2. Single-use packaging applications represent the largest share of the European plastic market, accounting for 40% of the total production1 and for more than 10% of the municipal solid waste3. As a result, 275 million tonnes of plastic litter were generated in 2010 by the world’s coastal countries, of which 4.8 to 12.7 million tonnes were estimated to have ended up in the oceans, a scenario projected to increase by an order of magnitude within 20253.

Since the first reports on the presence of plastic in the oceans, worldwide attention has been focussed to this problem and the number of scientific publications has seen an exponential growth4. Vast accumulation areas have been discovered in all main oceanic gyres5, and every part of the oceans examined so far, revealed the presence of marine litter, including polar seas9 and deep-sea sediments10. Plastic is now so abundant that it has been proposed as a new stratigraphic indicator of Anthropocene.

Over 92% of all plastic items found at sea are generally smaller than 5 mm12. These tiny particles – hereinafter referred to as microplastics – may either result from the breakdown of larger objects, or they can directly enter the marine environment as granules, pellets and fibers. Microplastics can act as dispersal vectors of chemical additives, organic and metal pollutants accumulated from surrounding waters13 and provide habitats for a wide range of rafting organisms and microbial communities. Being in the same size class of many planktonic organisms, ingestion of microplastics is widely reported and the first evidences of trophic transfer are emerging. As a result, indications of negative effects at both, individual and sub-organismal levels are starting to appear, to the extent that the classification of plastic waste as hazardous was recently suggested……..