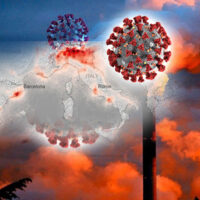 …This study found a steep increase in all cause mortality in Nembro in early 2020 compared with the rather stable mortality rate observed over the past eight years in this city. More Nembro residents died in March 2020 than in the entire previous year or in any single year since 2012, with the all cause mortality rate in that month almost 11 times that observed in March 2019. After accounting for a potential sudden decrease in population size in a sensitivity analysis, this deviation was even more pronounced. The increase in mortality was mostly driven by an increase in deaths of older people (≥65 years), especially men. Since the population of Nembro had been relatively stable across recent years, we conclude that this rapid increase in deaths is attributable to the covid-19 pandemic. Only about half of the deaths observed since the pandemic onset (21 February to 11 April 2020), however, were categorised as confirmed covid-19 deaths.

Strengths and limitations of this study

The information used in our study was obtained from various sources. We acknowledge that some of the data might be provisional or not fully updated. Given the state of emergency and rapid development of covid-19, however, this limitation was unavoidable, and we did not observe any meaningful mismatches between the data sources. The source for confirmed covid-19 deaths is not official and does not include date of death, but rather the date the laboratory received the biological sample. This means the number of confirmed covid-19 deaths reported in our study is likely to be slightly higher than the official number in the same period because we included deaths of those who might have died after the 11 of April (although their sample was sent to the laboratory earlier). Furthermore, we know these deceased individuals tested positive for covid-19, but we cannot be absolutely certain whether the disease was a contributing cause of death. This means the difference between covid-19 specific deaths and the increase in all cause deaths could be even more extreme. The OnData repository we used in our study was the only data source available at the municipality level.

We did not estimate age-sex specific all cause mortality because information on the age-sex structure for Nembro was only available yearly, and the last update was on the 1 January 2019. Therefore, we preferred to avoid unreliable projections of person time at risk that would be based on strong, likely unreasonable assumptions.

Comparison with other studies

Our findings corroborate results from a large study by the Istituto di studi e ricerche Carlo Cattaneo.25 In that investigation encompassing more than 1000 Italian cities selected because of an increase in mortality compared with previous years, the authors compared the overall number of deaths between 21 February 2020 and 21 March 2020 with the number of deaths in the same period averaged over the previous five years.25 The study concluded that even under the best case scenario, in which all other Italian municipalities (about 7000) showed no deviation from the average mortality measured in previous years, the number of deaths attributable to covid-19 in Italy would still be twice as high as the number of confirmed deaths from covid-19 reported by the Italian authorities.25 This study sheds light on the scale of the problem—that many deaths are erroneously not being attributed to covid-19 and that many of those who die outside of a hospital and have the disease are not being tested.25 The authors also noticed large increases in mortality in regions not considered to be key Italian SARS-CoV-2 hot spots.25 Another report, issued by the Italian Ministry of Health and the Italian National Center for Prevention and Control of Disease, about the daily surveillance mortality project (SiSMG) involving 18 major Italian cities, found similar results.8 According to this report, the two included Lombardy cities (Milan and Brescia) showed a large increase in the number of all cause deaths in the period from the beginning of the outbreak to 18 March 2020 compared with the average number of deaths in the same period across the previous five years…https://www.bmj.com/