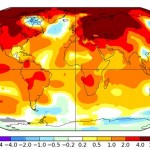 …..How much of a role is El Niño playing?
We’re currently at the peak of a very strong El Niño event, which has brought warm water up to the ocean surface. That’s certainly played a major role in the current record-breaking temperatures. The hottest years are almost invariably years with El Niño events, although 2014 was the first year in decades to set a temperature record without an El Niño.

For comparison, the current El Niño event is very similar to a previous one in 1997–1998. That event made 1998 by far the hottest year on record at the time, and it’s why contrarians often cherry pick temperatures over the past 18 years – the abnormally hot 1998 was 18 years ago.
However, the past 6 months have been 0.43°C hotter than the corresponding months in 1997–1998. So clearly, while El Niño is a big contributor to the current record-shattering temperatures, human-caused global warming is playing a major role as well. Climate scientist Michael Mann attributed the record to approximately 50% human influences, and 50% a combination of El Niño and natural weather fluctuations….