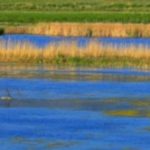 But if these ecosystems are not protected, they could release huge amounts of greenhouse gases into the atmosphere

Coastal wetlands are among the best marine ecosystems to fight climate change, new research confirms.
A study published this week in the journal Frontiers in Ecology and the Environment compared the carbon sequestration potential of a handful of marine ecosystems and found that mangroves, salt marshes and seagrass meadows have the greatest impact on climate change. Helping less are coral reefs and kelp beds.
“We’re trying to emphasize that coastal ecosystems could be an important component of reducing emissions through conservation and restoration of these systems,” said Jennifer Howard, marine climate change director at Conservation International and co-lead author of the new study. “At a national scale, these three ecosystems could make a huge difference.”
Coastal wetlands take in carbon quickly and hold it for a long time, the literature review found. If they are not protected, the ecosystems could release huge amounts of greenhouse gases into the atmosphere, potentially jeopardizing the ability of some nations to meet their international climate commitments in the Paris Agreement, Howard said.
Indonesia, for example, is home to more than one-fifth of the world’s mangroves. In order to meet its emissions goals, establishing national policies to protect them is “absolutely crucial,” Howard said.
One reason coastal wetlands are such a good tool to cut emissions is because they’re fairly easy to manage. Simply put, most governments know where their mangroves, salt marshes and seagrass meadows are located.
The research also found that other marine systems, like phytoplankton, are long-term carbon sinks. But the authors said it would be incredibly challenging to create a policy that manages billions of microscopic photosynthesizing creatures found all over the ocean.
Compared with those, it’s much easier to oversee coastal wetlands.
Howard pointed to a national commitment by the Dominican Republic in 2015 to bolster and restore its carbon-rich mangroves. The pledge comes in the form of a “nationally appropriate mitigation action,” a tool under the U.N. Framework Convention on Climate Change, which provides tools and capacity-building to the country to help save its coastal wetlands and reduce emissions.
The study was compiled largely as a tool for scientists who communicate the benefits of coastal ecosystems to climate mitigation and adaptation to high-level policymakers, Howard said.
Yesterday, scientists from the Center for International Forestry Research released a report outlining the importance that local communities have in mangrove use planning.
Typically, federal government agencies manage mangrove forests in countries such as Indonesia, Vietnam and Tanzania. But mangroves do better when local communities maintain the rights to the wetlands and help draft conservation plans, the research shows.
It’s a growing model. In Ecuador, local communities have land and management rights to almost 40,000 hectares of mangroves and have documented increased seafood yields and other benefits.
Still, gender equity remains a missing element in mangrove conservation and management, the study found. It notes that women do much of the labor in maintaining mangroves but often have no ownership.
Reprinted from Climatewire with permission from E&E News. E&E provides daily coverage of essential energy and environmental news at www.eenews.net.