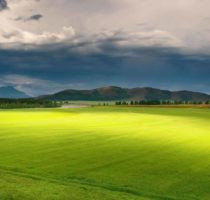 Humanity is now being given a second notice, as illustrated by these alarming trends (figure 1). We are jeopardizing our future by not reining in our intense but geographically and demographically uneven material consumption and by not perceiving continued rapid population growth as a primary driver behind many ecological and even societal threats (Crist et al. 2017). By failing to adequately limit population growth, reassess the role of an economy rooted in growth, reduce greenhouse gases, incentivize renewable energy, protect habitat, restore ecosystems, curb pollution, halt defaunation, and constrain invasive alien species, humanity is not taking the urgent steps needed to safeguard our imperilled biosphere.

As most political leaders respond to pressure, scientists, media influencers, and lay citizens must insist that their governments take immediate action as a moral imperative to current and future generations of human and other life. With a groundswell of organized grassroots efforts, dogged opposition can be overcome and political leaders compelled to do the right thing. It is also time to re-examine and change our individual behaviors, including limiting our own reproduction (ideally to replacement level at most) and drastically diminishing our per capita ­consumption of fossil fuels, meat, and other resources….https://academic.oup.com/